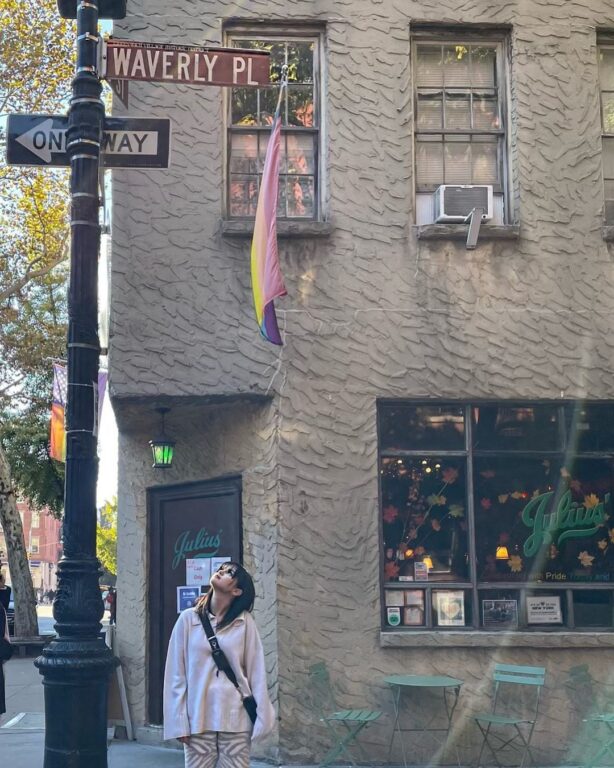 Selena Gomez shared a picture from Waverly Place in New York City on Instagram. This is where her previous Disney Channel show Wizards of Waverly Place was filmed.

Selena Gomez is getting ready to release the upcoming documentary My Mind & Me, which will give audiences a glimpse into her private life. Gomez will take her followers on an emotional trip as she opens up about her mental health and other topics, as shown in the video. The singer simultaneously brought back memories for her followers by posting a picture from Waverly Place.

The Wolves singer was captured in a sweet Instagram photo on October 29 standing in front of Julius, one of the area’s oldest bars, wearing a casual outfit consisting of a light-colored long-sleeve shirt and patterned slacks, and gazing up at the street sign. She said in the caption, “Where it all Began.“

Between 2007 through 2012, Selena appeared in four seasons of the famous show as the young wizard Alex Russo. Selena began her career as a Disney star before switching to music and quickly rising to the top. With her television show Only Murders in the Building, Gomez made a comeback alongside Martin Short and Steve Martin. Selena plays the teenage artist Mabel Mora in the hugely popular series. Gomez had previously insisted that she thinks the two of her characters, Alex and Mabel, are linked, saying that she feels like Mabel is Alex’s grown-up counterpart.

My Mind & Me documentary release

The documentary on Selena is scheduled to debut on AppleTV+ on November 4. In the same, the singer will be seen talking about a number of topics, including her Lupus diagnosis. Selena states in the documentary trailer, “Just be who you are Selena,” as she opens up about her battles with stardom, mental health, and other issues. The singer continues by highlighting the significance of self-acceptance and love, saying, “No one cares about what you are doing. It’s about who I am.“

Meanwhile, Fans are speculating about the possibility of a remake or reunion for Waverly Place in response to Selena’s most recent post from the show. The show recently celebrated 15 years since its first Disney airing. On October 12, the show’s 15th anniversary, David Henrie, who played Justin Russ, Selena’s elder brother on the show, put a flashback photo from the Disney+ Instagram onto his story and wrote, “15 years!!! Miss every second of it.”

What has Selena said about her documentary?

After weeks of rumors, the singer of “Rare” finally confirmed her documentary on September 8. On September 20, when she unveiled the trailer, she wrote: “We don’t get along sometimes and it gets hard to breathe… But I wouldn’t change my life. Out November 4.”

Selena revealed the existence of the documentary for the first time earlier this month when she released a brief, quiet teaser with her enormous following of 341 million Instagram users. The video clip displayed the My Mind & Me title card on a theatre screen.

The post’s description read: “Want to hear a section of my story?

Coming soon to @AppleTvPlus is My Mind & Me.”

It’s safe to say that the comments showed a lot of excitement from the Selenators.