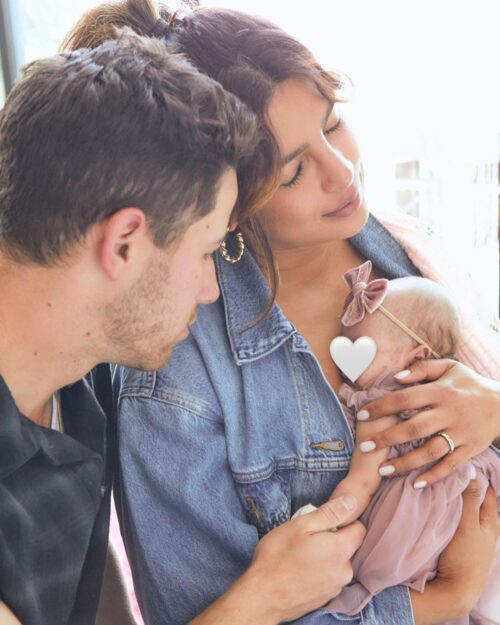 Malti, Priyanka Chopra’s infant daughter, and they warmed up near to the fireplace. Check out this sweet snapshot of a mother and daughter!

Malti, Priyanka Chopra’s 10-month-old daughter, and she are prepared for the holiday season! On November 10, Priyanka uploaded a picture of the actress and her infant daughter cuddling up close to a fireplace on her Instagram Stories. Priyanka captioned the adorable snapshot, “It’s beginning to look a lot like…” We can obviously fill in that blank!

Priyanka Chopra , who has a daughter with her husband Nick Jonas, 30, posed in front of the fireplace wearing a warm white blouse, white sweatpants, and a matching pair of hoops. Baby Malti was wearing a sweet onesie made of white and decorated with vibrant fruit prints. To protect Malti’s privacy and hide her face from the public, the mother-daughter photo was taken from behind.

The daughter of Priyanka and Nick was born prematurely in January and had to stay in the NICU for 100 days. On Mother’s Day, Priyanka finally revealed the first image of her newborn daughter along with a touching message. “On this Mother’s Day we can’t help but reflect on these last few months and the rollercoaster we’ve been on, which we now know, so many people have also experienced. After 100 plus days in the NICU, our little girl is finally home,” Priyanka wrote.

Even though she spends a lot of time with Nick and Malti, Priyanka recently had to travel to India to promote her Anomaly Haircare line, which she debuted a year ago. Even though Priyanka was only gone for a few days, that was certainly enough time for the celebrity to be separated from her child.

When Priyanka got home, she posted a picture to Instagram of her cuddling and holding up the infant Malti as the actress lay on the carpet. Nick had the largest smile on his face as he proudly regarded his wife and daughter.