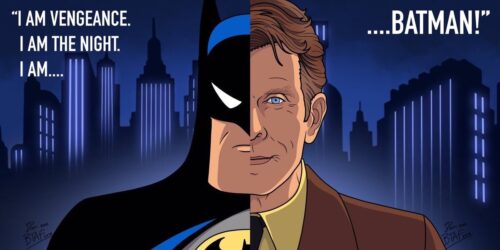 Following a battle with cancer, Kevin Conroy, a well-known voice actor whose sombre tone on Batman: The Animated Series was for many Batman fans the unmistakable sound of the Caped Crusader, passed away on Thursday. He was 66.

Kevin Conroy was the man behind the gravely voice on the Batman: The Animated Series.

Kevin Conroy, a well-known voice actor whose sombre delivery on Batman: The Animated Series was for many Batman fans the unmistakable sound of the Caped Crusader, passed away at the age of 66.

Warner Bros., the show’s producer, revealed on Friday that Conroy passed away on Thursday following a battle with cancer.

Conroy frequently appeared alongside Mark Hamill’s Joker as Batman in the renowned animated series that aired from 1992 to 1996. Conroy continued to serve as nearly the sole voice of Batman in animated media, lending his voice to about 15 movies, 400 television episodes, and twenty video games, including the Batman: Arkham and Injustice series.

No one has played the Dark Knight more in the eight decades of Batman.

He has been the Batman for a number of generations. Hamill in a statement. “It was one of those perfect scenarios where they got the exact right guy for the right part, and the world was better for it.”

“He will always be my Batman,” Hamill said.

Conroy became a sought-after figure on the convention circuit as a result of his popularity with fans. Conroy was a stalwart and well-liked figure in the frequently turbulent world of DC Comics. In a statement, Warner Bros. Animation said Conroy’s performance “will forever stand among the greatest portrayals of the Dark Knight in any medium.”

Kevin always carried a light, whether he was giving it his all in the recording studio, providing food to first responders after 9/11, or ensuring that every fan who waited for him had a chance to meet their Batman, ” said Paul Dini, producer of the animated show. “A hero in every sense of the word.”

Conroy began his career as a skilled theatre actor after being born in Westbury, New York, and raised in Westport, Connecticut. He shared a dorm with Robin Williams while attending Juilliard. He went on tour with John Houseman’s acting troupe, the Acting Company, after receiving his degree. At the Public Theater and on Broadway, he appeared in “A Midsummer Night’s Dream” and “Eastern Standard,” respectively. He performed in “Hamlet” at the Old Globe Theatre in San Diego, California.

He had a special connection to the 1980s production of Eastern Standard, in which Conroy portrayed a TV producer who was secretly living with AIDS. Conroy, who was gay, said at the time he was regularly attending funerals for friends who died of AIDS. He poured out his anguish nightly on stage.

Conroy relocated to Los Angeles in 1980, started performing in soap operas, and landed roles on TV shows like Cheers, Tour of Duty, and Murphy Brown. Before Conroy stepped in for an audition, casting director Andrea Romano had to go through hundreds of candidates to find her main actor for Batman: The Animated Series. He went on a friend’s tip and started casting right away.

Over the years, as Conroy’s performance changed, it occasionally made connections to his own life. Conroy described his own father as an alcoholic and said his family disintegrated while he was in high school. He channeled those emotions into the 1993 animated film “Mask of the Phantasm,” which revolved around Bruce Wayne’s unsettled issues with his parents.

“Andrea came in after the recording and grabbed me in a hug,” Conroy told the media in 2018. “Andrea said, ‘I don’t know where you went, but it was a beautiful performance.’ She knew I was drawing on something.”

Conroy wrote a comic book called Finding Batman about his unexpected experiences with the character and as a gay guy in Hollywood. It was published earlier this year.

“I’ve often marveled as how appropriate it was that I should land this role,” he wrote. “As a gay boy growing up in the 1950s and ’60s in a devoutly Catholic family, I’d grown adept at concealing parts of myself.”

The voice that emerged from Conroy for Batman, he said, was one he didn’t recognize — a voice that “seemed to roar from 30 years of frustration, confusion, denial, love, yearning.”