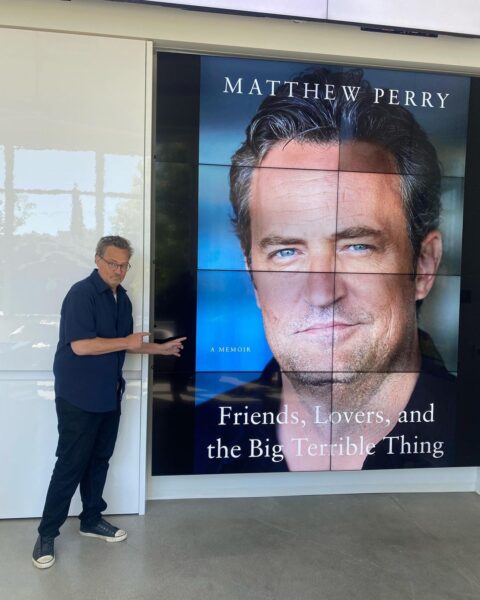 In his forthcoming autobiography, Matthew Perry discusses his battle with addiction and the making of Friends. Here are some of his most recent interview confessions before the same.

On November 1, Matthew Perry’s autobiography will be published.

Friends, Lovers, and the Big Terrible Thing, Matthew Perry’s upcoming memoir, will be published on November 1. The Friends actor had a challenging Hollywood career before gaining international fame as Chandler Bing. Perry has always been open about his battle with addiction, and he hopes to help others with his book.

Prior to the publication of his biography, Matthew spoke with People about his motivation for writing it. The actor insisted that he was “very positive” it would benefit readers. Although, as Perry admitted, he had to wait until he was “safely sober” to write down what he had been through and share his life experiences, it wasn’t all that simple. The actor will explore his struggles with alcoholism and addiction while also working on one of the most popular comedies in the world, revealing alarming moments from his life in the biography.

According to People, Matthew describes in his memoir how he survived a recent near-death encounter. The actor discusses how his colon ruptured due to drug abuse and how he had to fight for his life for weeks. He describes being in a coma for two weeks, spending five months in the hospital, and needing to use a colostomy bag for nine months as a result of the incident. According to Perry’s family, the physicians had given him a 2% chance of survival.

The actor was open about his relapses and revealed that he has visited rehab 15 times over the years, but not mentioning how long he has been sober. The actor insisted that his health is “very good presently.” With the comment, “That’s a lot of reminders to keep sober,” Matthew also disclosed that he had had 14 surgeries on his stomach to far.

While Matthew Perry was 24 years old when he joined the group of Friends, it was previously disclosed by the actor himself on the Friends reunion how he panicked over not landing his jokes that while his on-screen character could crack a joke through any situation, the same wasn’t the case off-screen. Speaking about his addiction while working on Friends, the actor said Season 9 was unique since he remained sober the entire time, and it also happened to be the season that earned him an award nomination.

Matthew Perry stated he was using 55 Vicodin per day and had down to 128 pounds, remembering his worst period of Friends. The actor described how the Friends group, which included Jennifer Aniston, Matt Le Blanc, Courteney Cox, David Schwimmer, and Lisa Kudrow, supported him at his toughest time. He stated: “Similar to penguins, In the wild, penguins will surround and support each other when they are ill or severely injured. Up until the penguin can stand on its own, they proceed around it. The cast essentially did that for me “through People.

There have been a number of well-known people in Matthew Perry’s past relationships, including Lizzy Caplan, Yasmine Bleeth, and Julia Roberts. Although the actor admits that he was scared of being in relationships and that, in most situations, he ended them altogether.

The actor said to People when discussing what caused him to quit his personal relationships and call off an engagement, “I left first because I feared they were going to annihilate me.” The actor also acknowledged that he formerly had “tremendous dread” of falling in love, but that he has since conquered that anxiety.

The actor is now ready for a fresh relationship and wants someone who can support themselves. The actor said, “I got burnt a few times by ladies who wanted my money, not truly caring about me,” when discussing a bad encounter he had in the past. Speaking openly about the qualities he would ideally seek in a companion, the actor said he would prefer “someone who can have a back and forth with me,” as well as someone with a sense of humour and who is attractive on the inside and out.

On embracing fatherhood in future

Matthew also disclosed that although he is open to beginning new relationships right now since he feels secure and isn’t afraid to love any longer, he has also given parenting some thought in the future. The 53-year-old actor is confident in his ability to be a great father. Perry remarked, “I grew up with a lot of tiny kids around me, and that’s probably why, but I can’t wait,” when asked about his love of kids.